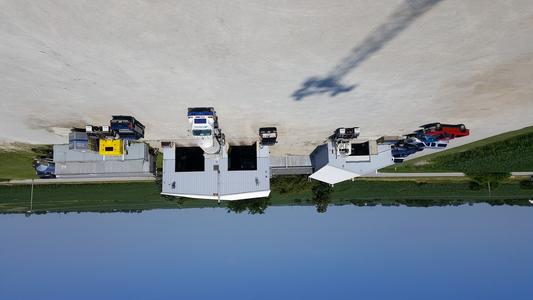 Apolis Transport Inc. is a liquid bulk carrier based in Peotone, Illinois.  The company was formed in 1983 by the late Cornelius “Cork” Kuiken.  It is now owned by David and Bonnie Kuiken.  David is Cork’s son.  Both men were drivers and owner operators before the formation of Apolis Transport.  David’s daughter Kristen Crisp, a Cedarville University graduate, also works at the company marking the third generation involved in the family owned business.

Apolis services the 48 continental United States and several Canadian provinces hauling primarily lubricants, wax, and deicer.  The company utilizes employee drivers and owner operators.  In 2014 Apolis commenced on a rebranding with a new commitment to being “Safety Focused – Service Driven”.  Many of the company’s trailers have received a wrap with the new signage.  Safety and compliance is more than a priority, it is a core value for doing business with the people of Apolis Transport, its customers, the traveling public, and government agencies.

Apolis is currently recruiting.  Owner operators are paid 70% of the gross line haul rate and 100% of the fluctuating fuel surcharge.  Company drivers earn up to 30%.  There is a sign on bonus and other available benefits.

Apolis is involved with numerous community and non-profit organizations.  The company is an active supporter of the American Cancer Society and the Relay for Life.  The Apolis team is named “The Peanut Butter Conspirators”.  The ACS relay team was formed by Joel Kuiken who is the grandson of Cork and son of David.  Joel walked as a Leukemia survivor the first year of the team.  Later in 2000 Joel’s courageous battle with Leukemia ended.  Apolis recently took delivery of two brand new tank trailers.  One of those trailers was wrapped, as a memorial to Joel, with the American Cancer Society and Relay for Life logo and theme.

Apolis also sponsors a golf outing, the Joel Memorial, on the first Saturday of each June for the American Cancer Society with 100% of proceeds going to the ACS.

If you see one of the Apolis trucks out and about ask the driver about hauling with Apolis.  Recruiting, safety, and operations can also be reached toll free at 800-7-APOLIS.